Several days ago it was February, 23. This day is a national holiday in Russia, the Day of the Defender of the Motherland. Unofficially it is known as the Men's day. This day or the day before we congratulate our men and give them presents.
This year my company (JetBrains) organized the day before it (February, 22) in the traditional Russian style. This is the way how the most active women were dressed (I'm left): 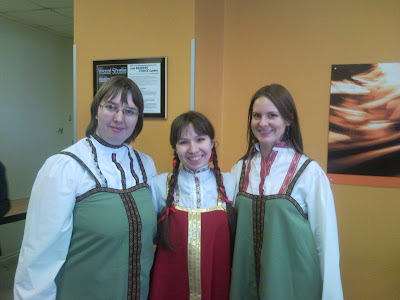 We all had a great opportunity to try ourselves in traditional Russian handicraft. Below there are my results (all these things I tried the first time ever in my life):

Email ThisBlogThis!Share to TwitterShare to FacebookShare to Pinterest
Labels: holidays

Last several days I mostly experiment with tatting rather than tat somebody's patterns. Here it is one of the successful experiments, Wavy Braid (motif #16): 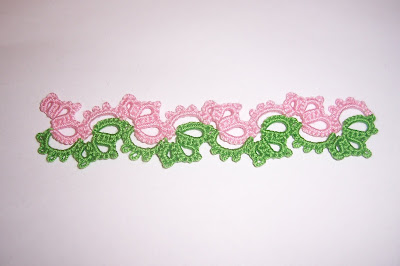 Its pattern is here.
Currently I work on my first doily and several more braids. Hope to show them soon.
Posted by Unknown at 22:43 10 comments:

Several days ago I decided to participate in Umi & Tsuru Tat Along. I hoped to finish one fragment in a couple of days and post it but some other ideas came to my mind and I stopped tatting this pattern for a while. Anyway, I have done something.
I started with one flower (motif #14): 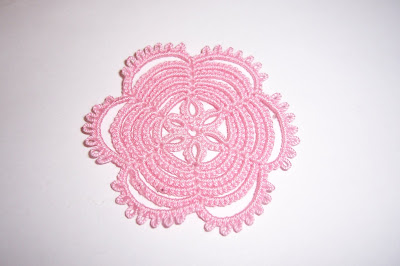 I just wanted to tat 4 flowers and 4 leaves and make a square from them. So, I tatted one more pink flower, but it looked very different (and much more accurate, I think)! Well, I liked the second one more and tatted a third flower (red) which somehow appeared to be different from the two previous! Anyway, it was time to tat a leaf (motif #15) and connect it to the ready flowers: 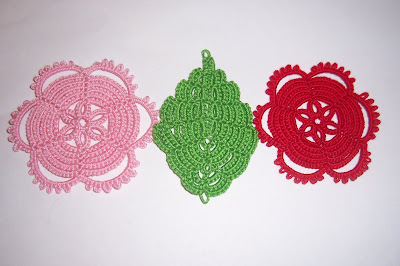 It is quite funny, this pattern. I can easily crochet something that will look just the same as these fragments. Well, anyway, I will finish this pattern a bit later.
My lovely husband likes the ready part: 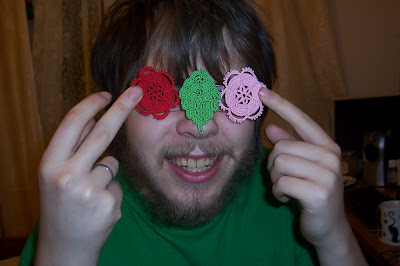 Email ThisBlogThis!Share to TwitterShare to FacebookShare to Pinterest
Labels: 25motifchallenge, tat along

I finally found time to write down my patterns and find hosting for them. They live on FileDen.com now. I do not know how to draw diagrams so they are presented as photos and instructions. The list is just under my photo on blog page. Hope you will like them!
Please do not hesitate to ask me if something is not clear, and to tell me if something is wrong!
Posted by Unknown at 19:34 2 comments:

Email ThisBlogThis!Share to TwitterShare to FacebookShare to Pinterest
Labels: patterns

This little dragonfly (motif #13) is Riet's pattern for SSSR practicing: 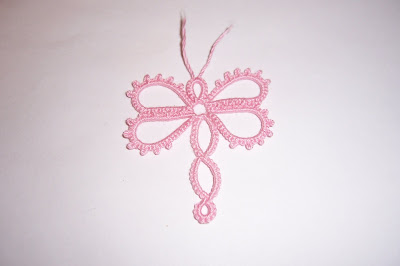 One more tatting technique I now know! Very pretty and very simple pattern, that needs one shuttle. SSSR appeared to be less difficult than I thought. Well, I have practiced split chains while tatting clover, and this is just the same. I know exactly what pattern with SSSRs I want to tat next!
Posted by Unknown at 01:18 2 comments:

Sometimes you just select some pattern, tat/knit/crochet it, get pleasure and result, and that's it. But sometimes needlework becomes a truly research... This is one of such cases.
Everything started several days ago when I was looking for some easy pattern with big rings and picots (yeah, again!) to test new threads. In fact big rings are rarely used in patterns, and I found nothing interesting. So, I tatted something square looking (motif #10): 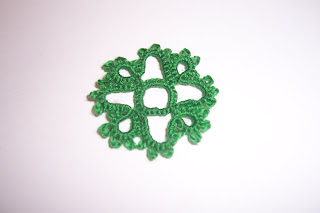 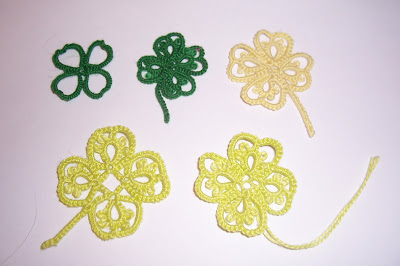 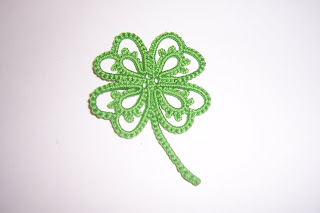 It is the best one - we both liked it! It's pattern is a bit similar to the Hibiscus pattern. I will write it a bit later.
So, thank you, Alex, you give me inspiration!
Posted by Unknown at 20:42 6 comments:

I was very, very busy all this week... That's why I could tat days 11 and 12 of TIAS only yesterday evening. Well, I finished my first goat - Winter (motif #9): 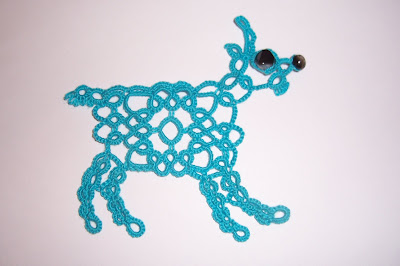 But it was so sad that TIAS is over... And so lonely... I couldn't resist and tatted a friend for it - Spring: 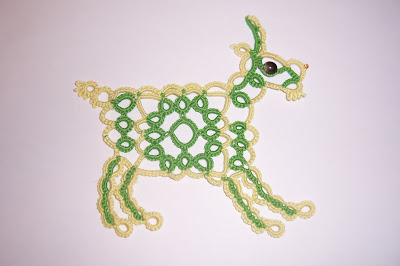 My husband liked them both but the second one much more! Maybe because it's quite cold in St.Petersburg last month... Well, Winter and Spring are now happy to be together and discuss weather and everything else that the goats usually discuss! 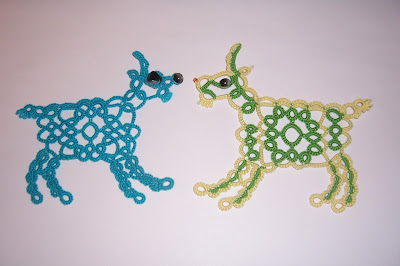 Thank you, Jane, for TIAS and this wonderful pattern!
Posted by Unknown at 20:15 No comments:

I did it at last! The first version of tiling from Simple Polygons that is fine (motif #8): 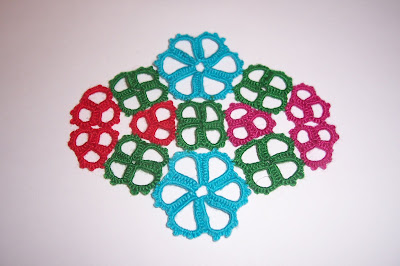 Well, these Simple Polygons are not the same as in my previous post. Here you can see red triangles, green squares and blue hexagons. If you want to tat polygon with N sides, you should tat N connected rings:
R X (picot or join to previous R) 3 - 3 - 3 - 3 (picot or join to next R) X
The question is, what does X equal to? In common case X is about 6 * ctg (pi / N).
So:
Well, I'm not absolutely sure about these numbers, I must say. I should try to tat such an example with some other thread, not Iris. Iris becomes not fine when you work with big rings. Rose is much better is this sense.
Anyway, the whole idea works! My first polygons were simple and pretty, but not functional, these are simple and functional, but not very pretty. I still believe that I can create some simple, pretty and functional pattern at the same time. Well, we'll see. 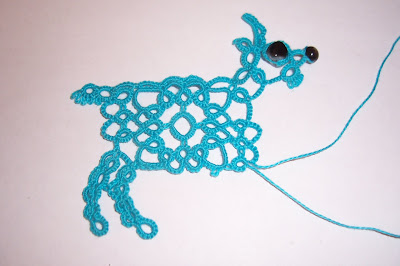 I today I was first again! I'm happy!
Posted by Unknown at 00:40 No comments:

I've realized that I completely forgot to show my TIAS progress for last 3 days! Here they are: day 7 with somebody's tail: 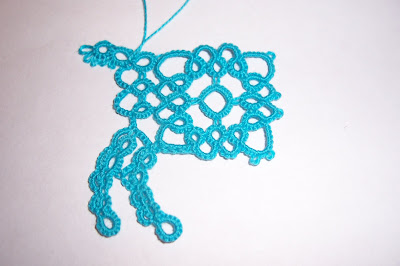 Day 8 with somebody's horn (the photo is dark because it was made at work on mobile phone camera): 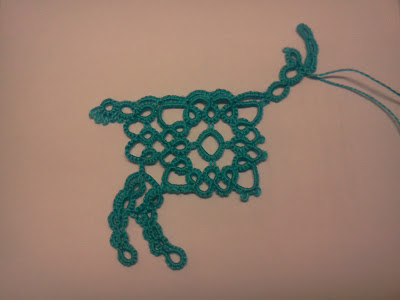 Day 8 was the first (and maybe last) day of TIAS when I tatted motif the first among all the participants! I'm proud of this!
And day 9, looks more like a goat: 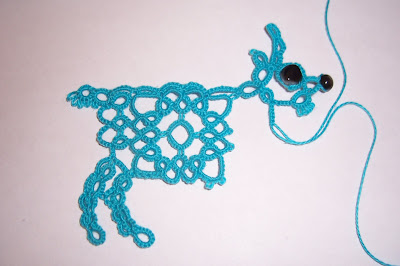 It was a challenge for me, because I bought beads after TIAS started, so I had to cut thread, add beads and tie it again. And I never tatted with beads before! Looks like the eye and the nose would better be less. But I like this goat anyway!
Posted by Unknown at 03:17 No comments:

Last several days I was not very productive in tatting. Well, I tatted a lot but there is just nothing to show.
First of all, I tried another thread for my Hibiscus pattern, named Rose (I don't know why but a set of threads popular in Russia have floral names). On the photo it is left: 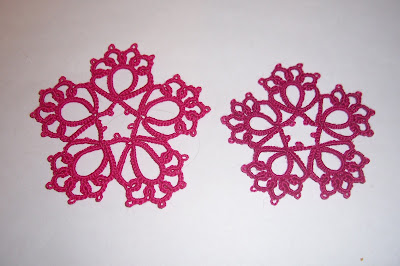 These "floral" threads do not have numbers. But if we calculate the thread number as length in meters per 1 gram, Iris is about #9 and Rose is about #7.
Hibiscus gave me a funny idea, that I have been trying to implement for last several days. There is a pretty thing in Math - tiling with regular polygons. I'm sure, that pictures here and here will explain this idea much better than any of my explanations. So, I decided to make very simple one-shuttle pattern that will present different regular polygons with slight modifications. Here is the first attempt (motif #7): 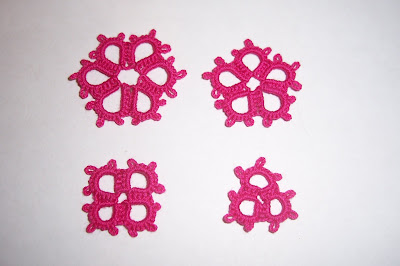 The pattern consists of all rings. If N is number of sides of polygon, you should tat N rings:
N (picot or join to the previous ring) 2 - 4 - 4 - 2 (picot or join to the next ring) N
The pattern is finished with lock join to the base of first ring.
Well, it seems to me, that these little motifs look fine. However, when I tried to connect such motifs into one of these tilings I couldn't! It took two unsuccessful attempts to understand that the length of one ring (e.g. 4 + 2 + 4 + 4 + 2 + 4 = 20 for square motif) doesn't equal to that one it should be (4 * 6 = 24), so the actual lengths of polygon's sides are different.
Now, when I know this, I work on another version of Simple Polygons, as I call them. Hopefully the third attempt will be better.
Posted by Unknown at 03:07 No comments: